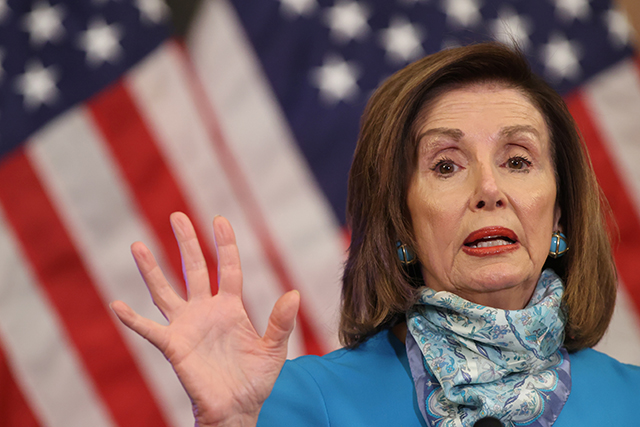 After negotiations between Republicans and Democrats came to a halt, House Speaker Nancy Pelosi said she intended to pass her own spending bill.

After the passage of the $2.2 trillion CARES Act, the legislation that included $1,200 checks and $500 checks for dependents and small business loan assistance, one question has gripped Washington: What next?

With the economic impacts of coronavirus-related shutdowns still being acutely felt across the U.S., many in Congress are calling for more relief. But after negotiations between Republicans and Democrats came to a halt, House Speaker Nancy Pelosi said she intended to pass her own spending bill.

The bill will include $750 billion for states and local governments, money that local governments have been asking for as they push the limits of their budgets. But the rest of the bill is up in the air, prompting a deluge of letters and advocacy from House Democrats looking to put their own proposals in the spending bill — including from Minnesota’s Democratic representatives in the House.

In a letter with 30 other Democrats, Rep. Ilhan Omar of Minnesota’s Fifth District on Friday asked Pelosi to consider student loan cancellation in any future COVID-19 response. “While we appreciate the steps taken in the CARES Act to provide temporary protections for many federal student loan borrowers, our response efforts to date have simply failed to meet the scale of the looming economic crisis,” the letter said. “Jobless claims have skyrocketed, and Federal Reserve experts predict they may exceed Great Depression-era levels.”

Pointing out that student debt falls disproportionately on low-income workers and families, communities of color, seniors, and veterans, the members ask for a universal one-time federal student loan debt cancellation, long-term payment relief for all borrowers, and protections for private student loan borrowers.

Other members in the Minnesota delegation have been rushing out letters to the Speaker at well. Rep. Angie Craig’s office seemed to pick up pace in the last few days, sending or signing letter after letter, as well as releasing new legislation.

The Second District congresswoman led a letter on Monday asking for money for animal disease prevention and response efforts in any future COVID-19 legislation. That letter included five other members, including Rep. Collin Peterson of Minnesota’s Seventh District and the proposal endorsed by the American Veterinary Medical Association.

Craig and Rep. Betty McCollum of St. Paul also joined 82 other members in asking for relief for the US Postal Service, a letter with six other members asking for $100 billion for child care in the next bill (the proposal mirrors the work Sens. Tina Smith and Elizabeth Warren have been doing in the Senate), and joined two other members in introducing the Protecting the Paycheck Protection Program Act of 2020, which would ensure small business owners receive tax deductions in addition to forgivable Paycheck Program Program loans.

All of this is in addition to what Craig has already proposed. Last month, Craig, along with Smith, also proposed a fix to the CARES Act that would allow dependents over the age of seventeen to receive a one time stimulus payment.

While Rep. Dean Phillips of Minnesota’s Third District did not send any public letters to Speaker Pelosi, Phillips has continued his approach of pushing out short bills that could fit into any COVID-19 response legislation. Phillips earlier this month proposed significant expansions to domestic American service programs and stronger benefits for those who had to evacuate from abroad.

The vote on any House legislation will come no earlier than Friday, according to the Wall Street Journal. It might not get far beyond that: Republican leadership on Monday said they are not in a rush to pass any future coronavirus legislation, with Senate Majority Whip John Thune of South Dakota telling Politico the bill is just “a messaging document.”

“We have not yet felt the urgency of acting immediately,” Senate Majority Mitch McConnell reporters on Monday. “That time could develop, but I don’t think it has yet.”

What To Expect For Your Student Loans This Week